All Valley Honey & Bee In The News

ALL VALLEY AT WORK 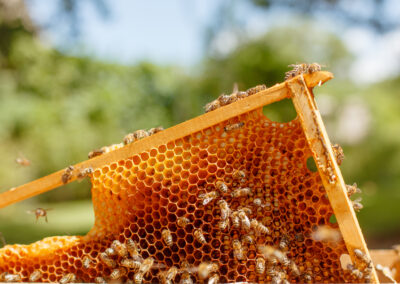 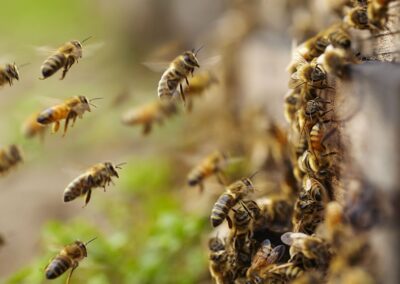 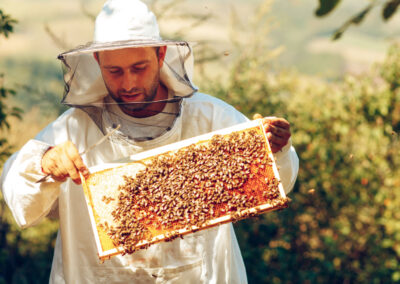 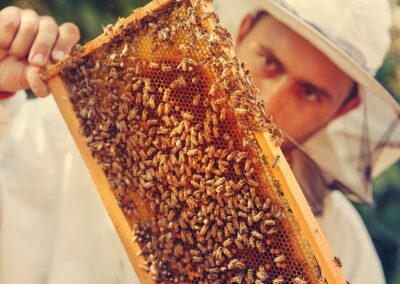 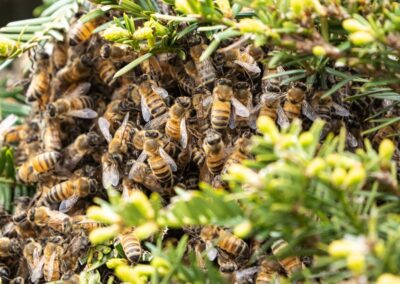 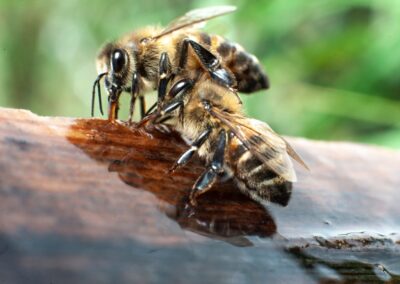 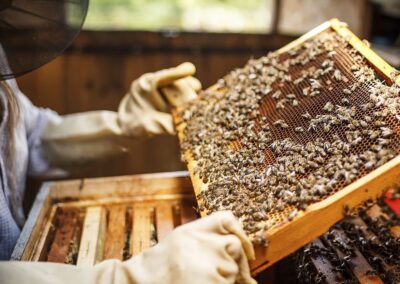 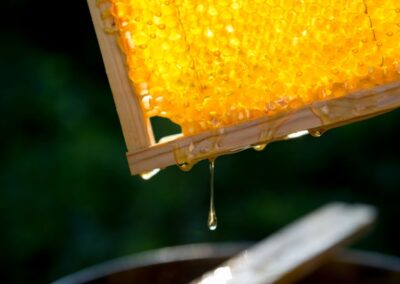 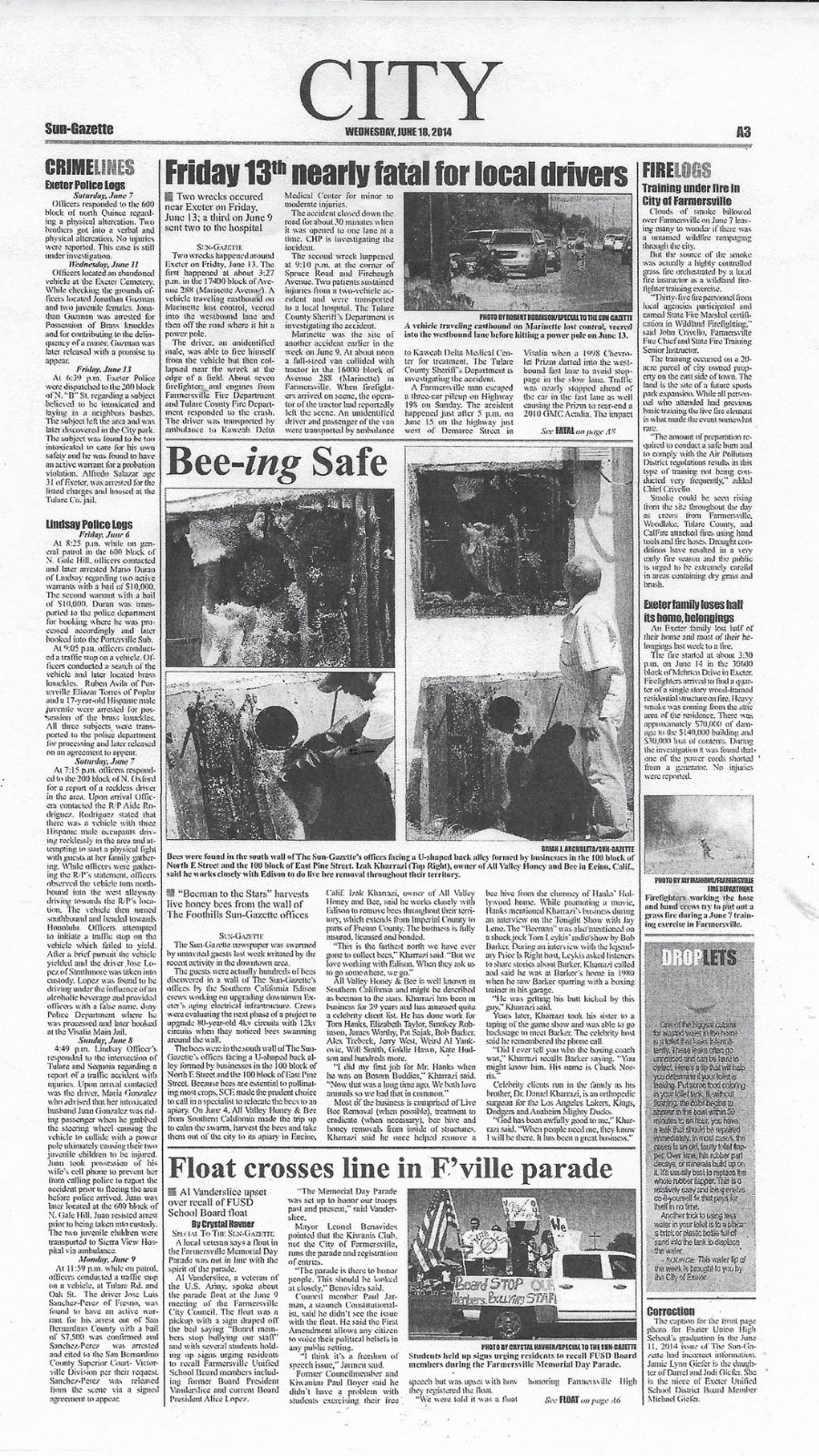 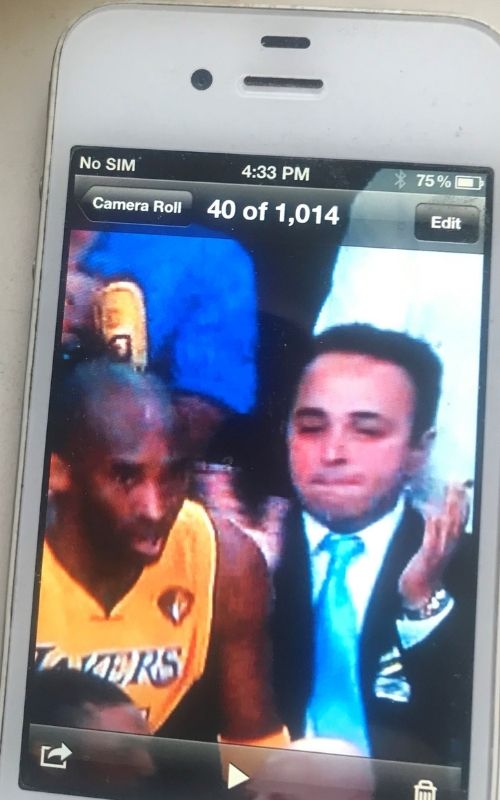 “Beeman to the Stars” harvests live honey bees from the wall of The Foothills Sun-Gazette offices.

The Sun-Gazette newspaper was swarmed by uninvited guests last week irritated by the recent activity in the downtown area.

The guests were actually hundreds of bees discovered in a wall of The Sug-Gazette’s offices by the Southern California Edison crews working on upgrading downtown Exeter’s aging electrical infrastructure. Crews were evaluating the new phase of a project to upgrade 80-year-old 4kv circuits with 12kv circuits when they noticed bees swarming around the wall.

The bees were in the south wall of The Sun-Gazette’s offices facing a U-shaped back alley formed by businesses in the 100 block of North E Street and the 100 block of East Pine Street. Because bees are essential to pollinating most crops, SCE made the prudent choice to call in a specialist to relocate the bees to an apiary. On June 4, All Valley Honey & Bee from Southern California made the trip up to calm the swarm, harvest the bees, and take them out of the city to its apiary in Encino, Calif. Izak Kharrazi, owner of All Valley Honey and Bee, said he works closely with Edison to remove bees throughout their territory, which extends from Imperial County to parts of Fresno County. The business is fully insured, licensed and bonded.

“This is the farthest north we have ever gone to collect bees,” Kharrazi said, “But we love working with Edison. When they ask us to go somewhere, we go.”

All Valley Honey & Bee is well known in Southern California and might be described as beeman to the stars. Kharrazi has been in business for 39 years and has amassed quite a celebrity client list. He has done work for Tom Hanks, Elizabeth Taylor, Smokey Robinson, James Worthy, Pat Sajak, Bob Barker, Alex Trebeck, Jerry West, Weird Al Yankovic, Will Smith, Goldie Hawn, Kate Hudson, and hundreds more.

“I did my first job for Mr. Hanks when he was on the Bosom Buddies,” Kharrazi said. “Now that was a long time ago. We both love animals so we had that in common.”

Most of the business is comprised of Live Bee Removal (when possible), treatment to eradicate (when necessary), bee hive and honey removals from inside of the structures. Kharrazi said he once helped remove a bee hive from the chimney of Hanks’ Hollywood home. While promoting a movie, Hanks mentioned Kharrazi’s business during an interview on the Tonight Show with Jay Leno. The “Beeman” was also mentioned on a shock jock Tom Leykis’ radion show by Bob Barker. During an interview with the legendary Price Is Righ host, Leykis asked listeners to share stories about Barker. Kharrazi called and said he was at Barker’s home in 1980 when he saw Barker sparring with a boxing trainer in his garage.

“He was getting his butt kicked by this guy,’ Kharrazi said.

Years later, Kharrazi took his sister to a taping of the game show and was able to go backstage to meet Barker. The celebrity host said he remembered the phone call.

“Did I ever tell you who the boxing coach was,” Kharrazi recalls Barker saying. “You might know him. His name is Chuck Norris.”

Celebrity clients run in the family as his brother, Dr. Daniel Kharrazi, is an orthopedic surgeon for the Los Angeles Lakers, Kings, Dodgers, and Anaheim Mighty Ducks.

“God has been awfully good to me,” Kharrazi said. “When people need me, they know I will be there. It has been a great business.